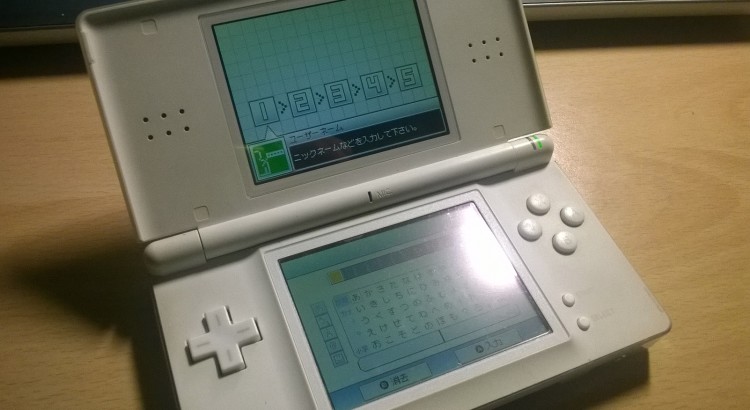 While browsing eBay some weeks ago, I found a faulty DS lite for seven dollars with free shipping. According to the seller, the console was not powering up. I remembered that a while ago, Farrapo said that a common problem with the DS Lite, it is that one (or both) of the fuses on the power board opens and the console will not turn on anymore. As I thought I could reuse some parts even if the console was irreparable, I decided to buy it. Even better if I could make the DS work. For me, the DS is beyond just a simple console, it is a portable device with two ARM processors, LCD display, touchscreen and wifi. You can run a lightweight Linux version and try development of homebrew software, the internet is full of good documentation about this.

When I got the DS, I checked for cracks or stains on the LCD, but did not find anything. When I opened the console I did not notice anything burned (or loose hahaha). Ah, back to the problem. It is a known issue that the DS has two fuses F1 and F2 on the board that can open and prevent the console to power up or charge. These components can be seen in the following pictures: Using the continuity test of the multi-meter, I confirmed that the fuse of the second photo (F2) had in fact burned. I thought about getting a substitute pair of fuses, but it would cost almost the price I paid on the console itself. so I decided to make a “bridge” with solder. Detail in the figure below:

Anything else than a solder bubble.

Once the fuse was removed and the solder bridge done, a small workaround allowed to power the console, since I do not have a charger. The console lighted up the charging light (top right of the ice cream Pokémon?!). Good signal! When trying to turn on the console, success! Apparently everything ok: the screens, buttons and the touchscreen. Thankfully, my flatmate knows Japanese, and changed the language for me ^^. I did no have any DS game here, but I could test if it would still run GBA games. Below a test with Metorid Fusion, I had not noticed Samus phrase until uploading the picture here. And that is the story of how I got a cheap DS. The solution: only a small solder bubble. Coincidentally, my girlfriend reminded me that once I bought a Game Boy and the #problem#  was a solder bubble, this one I could not fix, but got some good parts hehehe, including the cartridge slot I used in the Game Boy project.