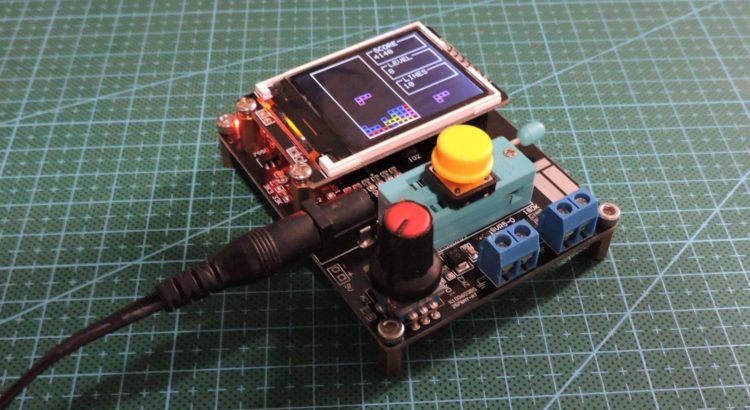 Welcome! In this post I talk about the reverse engineering of the GM328A transistor tester. I have drawn the schematics of the board and compiled new firmware for it. As a bonus, I also programmed Tetris for it.

Some time ago I wrote an article where I programmed one T3 LCR meter / transistor tester to run a clone of the cute t-rex game from the chrome browser. That LCR meter was one of the most useful instruments I ever had, specially because I have the same digital multimeter since I was 15 and that does not even measure caps. Unfortunately, the former did not endure the constant abuse (I often used it as a badge when going to conferences and such) and the LCD ribbon broke. 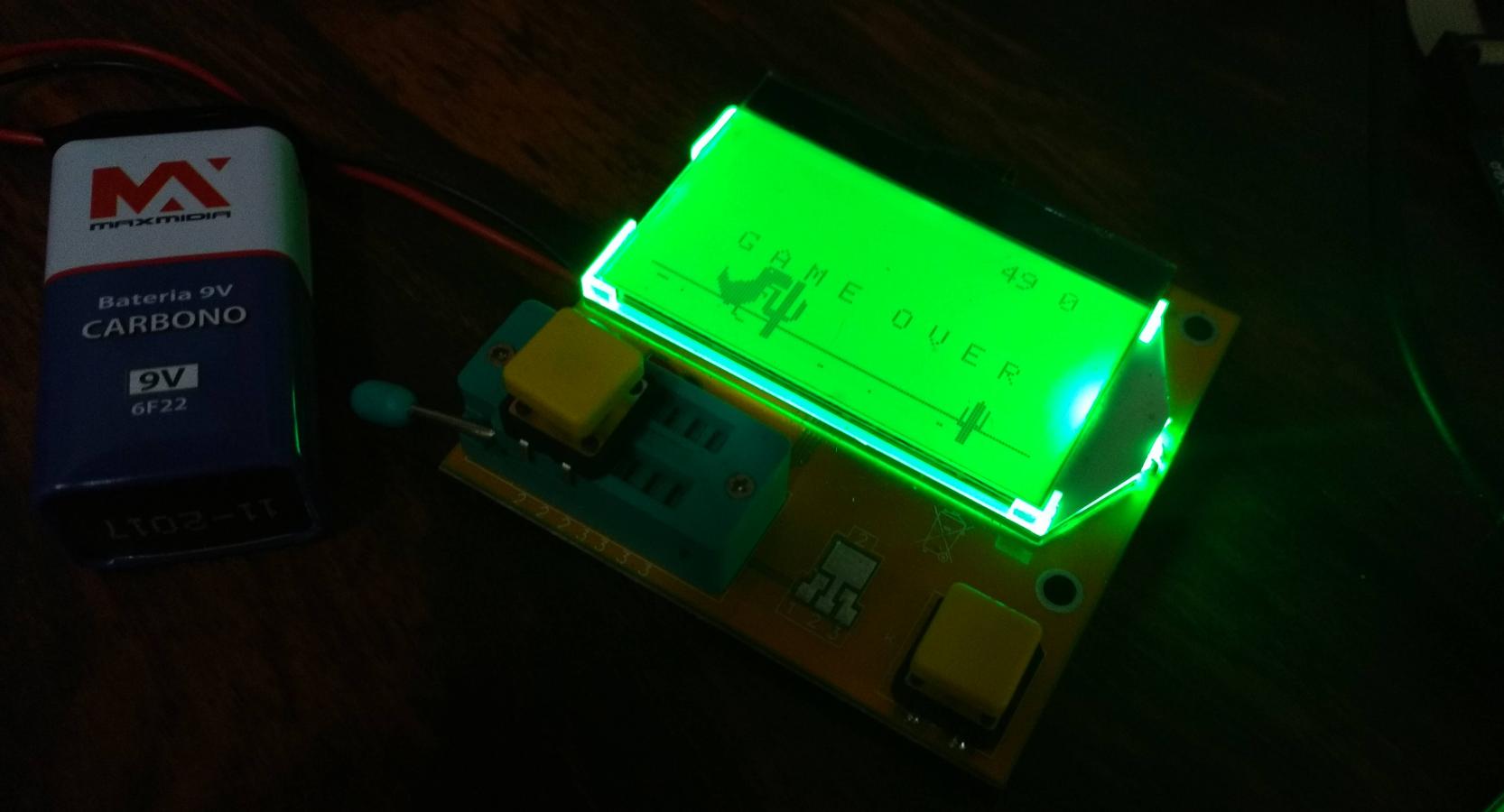 I scoped eBay for a replacement, and the T4 successor seemed a bit off and I did not like it at all. Prices for the T3 had gone up also. Thankfully I found something even better, this version was named GM328A. 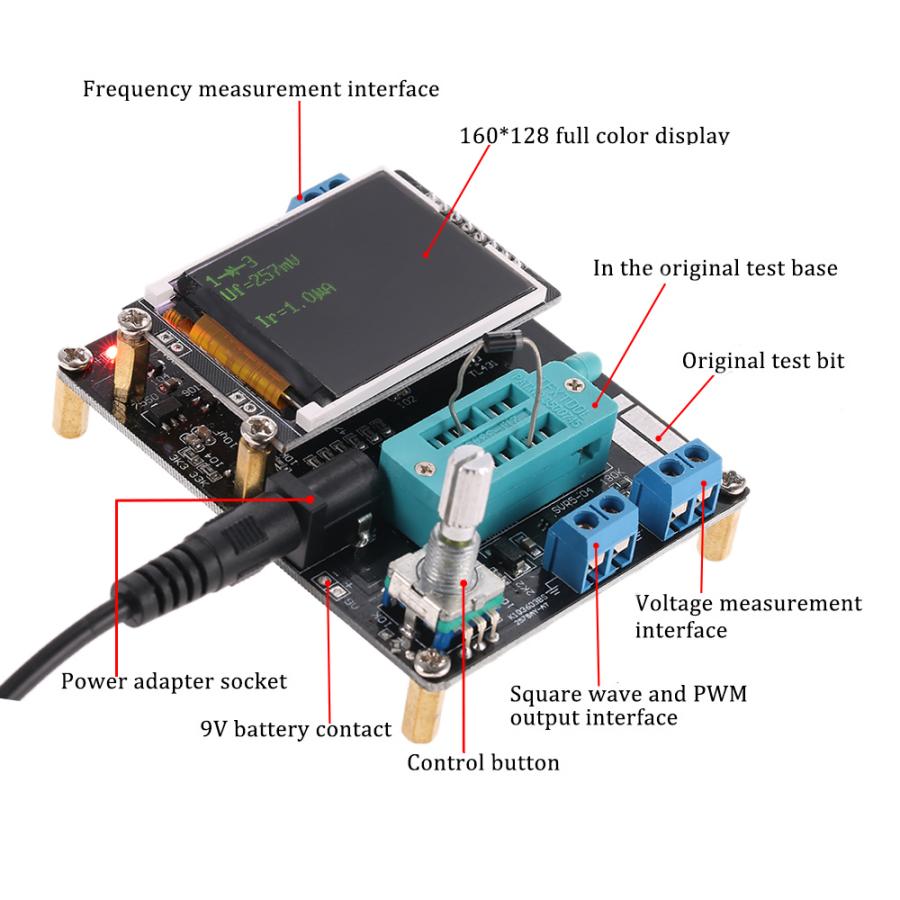 This LCR meter has a color LCD, which is great in case I continue using these as a made up badge. It also packs frequency and voltage measurement, a power jack, and PWM output. Additionally, the one I found was a mere 10 USD.

That said, these LCR meters make great development boards, in this post I detail the process I used to figure out the schematics for this model and also show a version of Tetris I coded for it. The reverse engineer efforts here are mostly related to the printed circuit board and not to the firmware.

Before we proceed, I have to mention that all these transistor testers are based on the same project, originally created by Markus Frejek and continued by Karl-Heinz.  You can find information and the code at mikrocontroller.net. Still, there are tons of different variations of the circuit sold on eBay and the like, in this post I reverse engineered the schematics for this board only.

Before anything, I thought it was good idea to backup the original firmware, but this is where I hit the first obstacle. Although the board seems hacker-friendly, even having a socket for the microcontroller, its firmware was locked. So instead of copying the firmware to the computer, I replaced the microcontroller. This way I could always have the original firmware and still use the board if I messed up.

As expected, the gm328a is also based on the Atmega328 (hence the name, I guess). This is the same microcontroller used in many Arduino boards.

I could have unsoldered everything in order to see the PCB traces clearly, but I did not want to ruin the tester, so I only used the continuity tester function of my multi-meter to figure out where the components were connected.This is a difficult approach, since one component can be connected to many others. Still, the circuit is small enough to not give me a headache.

Good thing that many of the passive components have values printed on the board. I have also used a magnifying glass to see the traces and the markings of the ICs. For some parts, I had to search online for compatible pinouts. The display, for example, I had to find it online (It is the ST7735) to figure out its pinout. 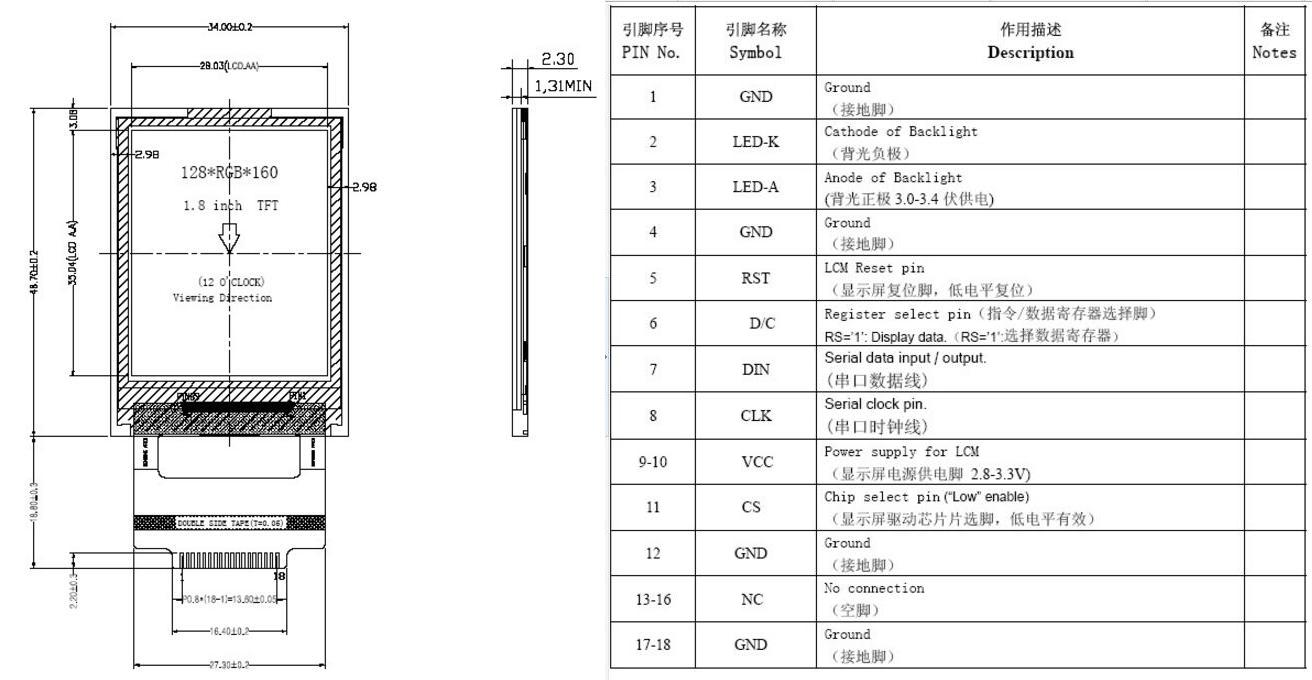 After a lot of testing and online browsing, I came up with the following schematic. You can click the image for full size. 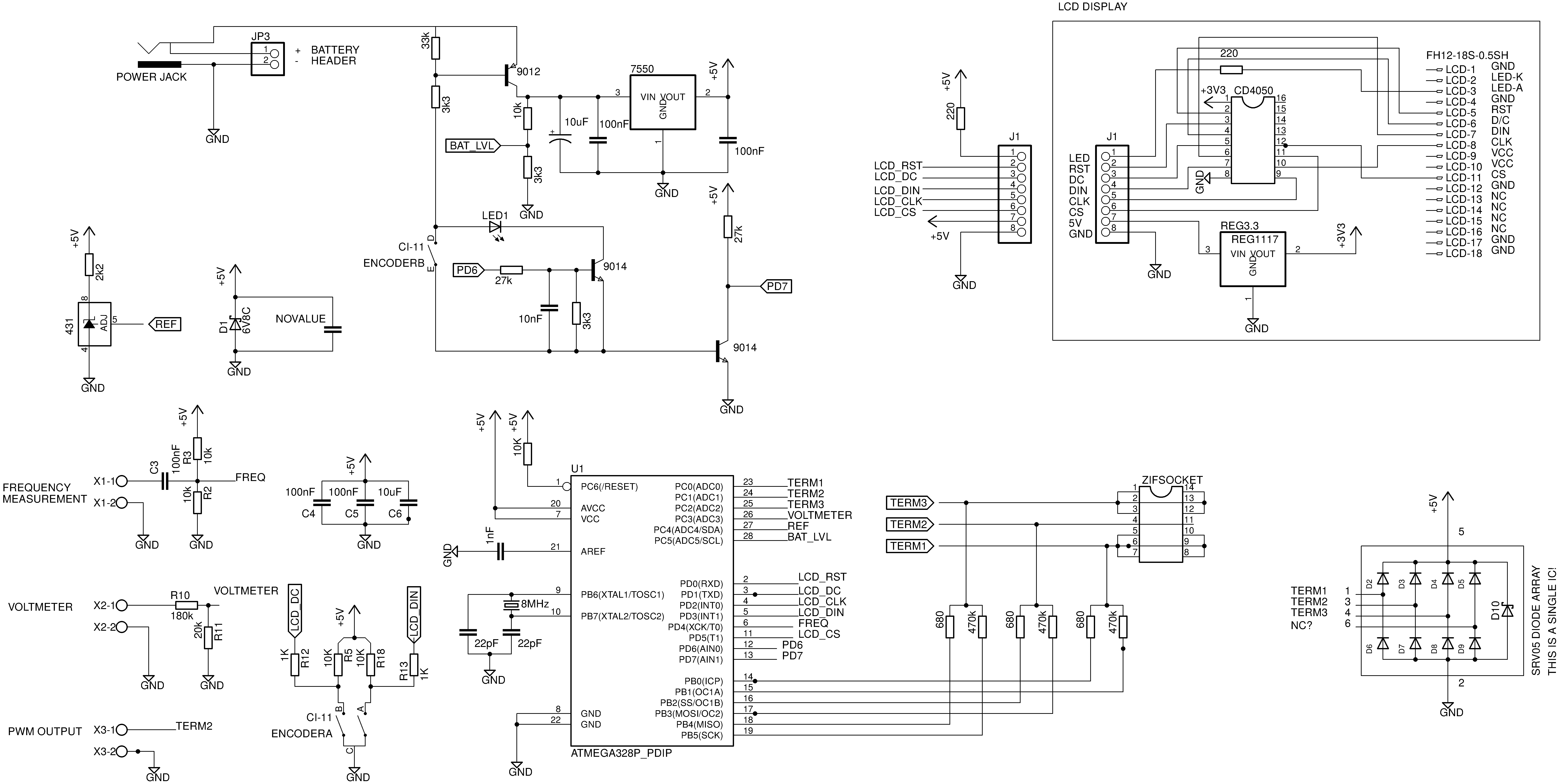 I did the best I could with just the continuity test. It may not be perfect but it it is good enough for its purpose, which is telling where the important bits are connected. you can find these schematics in Eagle format in the project’s repository. 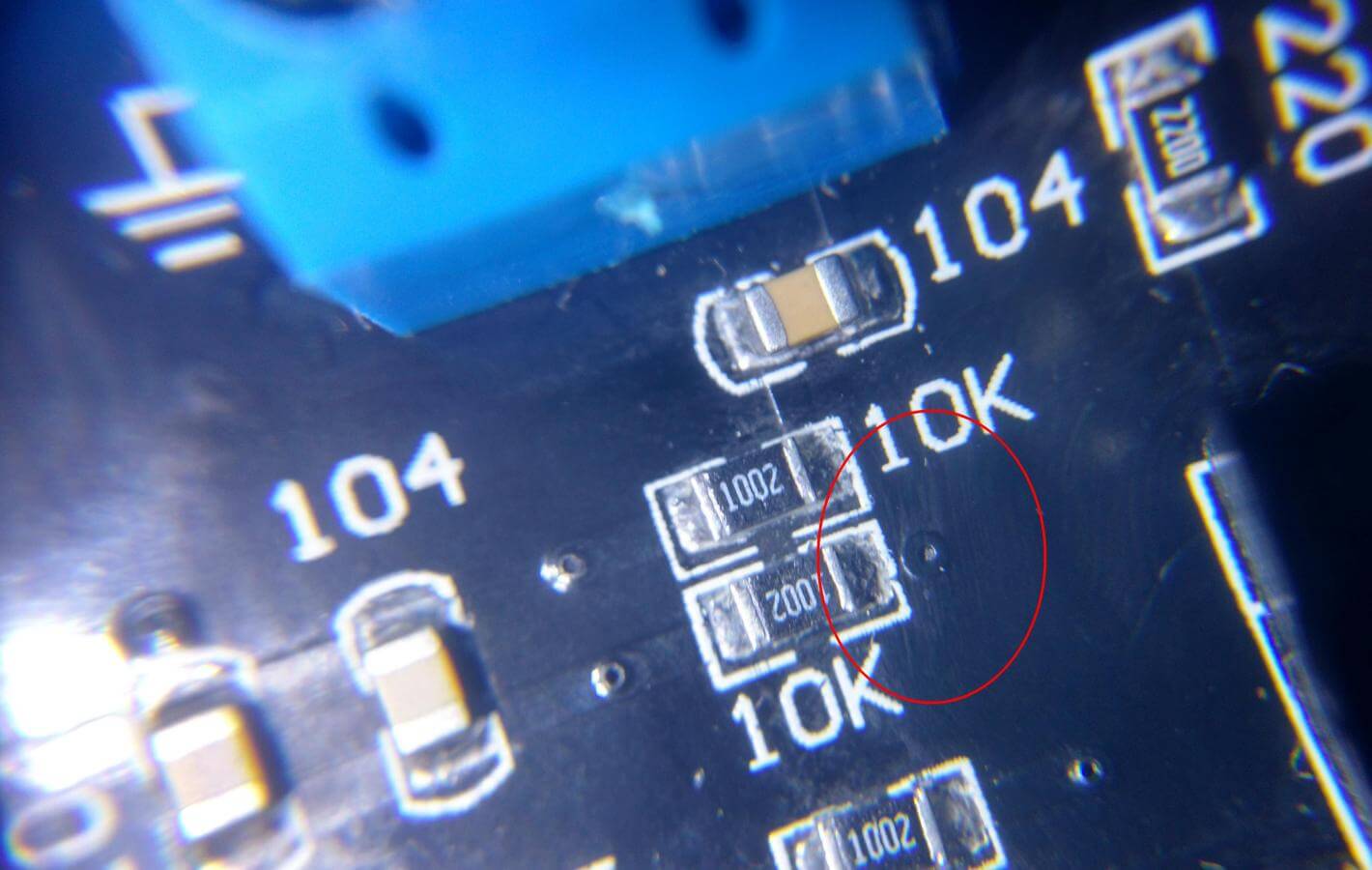 I tried to test the frequency measurement function to see if was missing something, but it did not work at all. I concluded that it was in fact a mistake on the PCB layout. I fixed the problem by removing the soldermask from the via and bridging it with solder to the closest resistor. 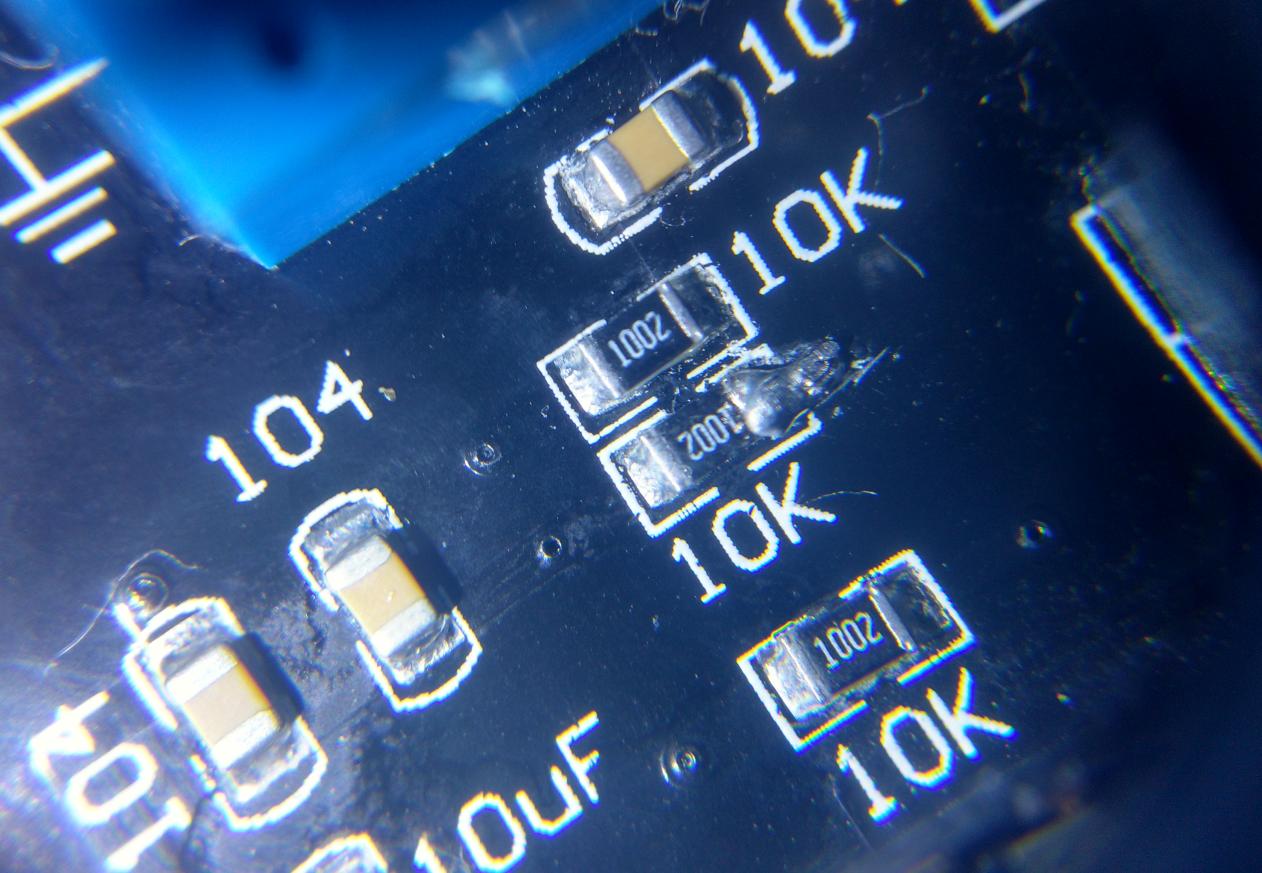 After that, the frequency measurement worked as it should.

Differently from the T3, this board does not have a programming port. Although the MCU is socketed and can be removed, that is a pain to do and I often accidentally bend the pins. I decided to add a temporary programming port for directly connecting the board to one of my trusty USBASP programmers.

Anyways, now with the pinout information from the reverse engineering in hands, I was able to compile a new firmware for the board. Firstly I downloaded the 1.34 version of the Transistor tester code from mikrocontroller.net. You can find all versions of the AVR transistor tester firmware here.

Then I just adjusted the pinouts according to the schematic I showed above, selected the type of LCD and configured the available functions and soon enough I had the transistor tester working with the new code. After some tweaking, I compared the results from the new compiled firmware with the one which came with the board. These results were collected after calibration of the board for both firmware versions.

You can find the edited firmware in the github repository. There you can also view the history of the files config.h, config328.h and Makefile to see what I have changed from the main fork. 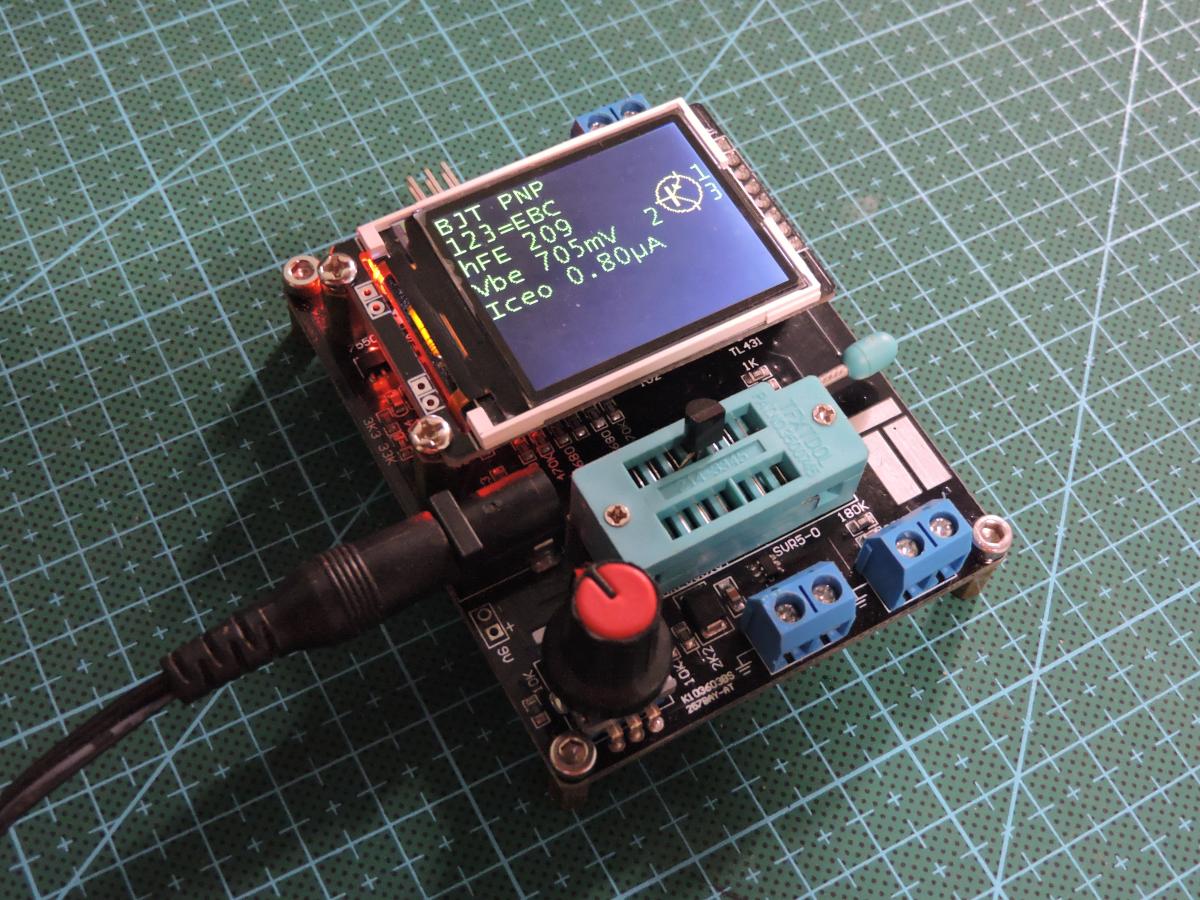 New firmware running on the board (2N3904 transistor)

Of course I had to program a game for this one (even though I know almost nothing about programming games). If the code seems like a spaghetti feast, you know why.

This gm328a has an encoder with a built in push button. So this is like having three buttons. This setup was really good for arkanoid or maybe pong, but I chose Tetris for two reasons: First, the levels are the same when progressing, the only thing that changes is the speed the blocks fall and the scoring. Second, Rafael said in the past that it was possible to program a working tetris in a single day, so I was really keen to see how long it would take me. Even using Arduino and libraries, It took me some days.

Last time I had a lot of “fun” programming the t-rex game using just bare C. I decided that this time I would use Arduino. BTW,  I translated the whole Arduino reference to Portuguese, so I kind know the functions by heart.

I also used some external libraries, listed below:

Programming the game was still quite the challenge. For starters, the LCD and the rotary encoder are connected to the same pins, so I had to alternate between writing data to the display or checking the encoder. Besides, I had to write data to the LCD very quicky, and watch the encoder the rest of the time. Otherwise the game would miss the turns of the encoder. The fact that the SPI display was being bit-banged did not help too. Because of this, I opted for using very simple squares for representing the tetrominos, not any wasting time filling them too.

To program the gm328a using Arduino, I just select Arduino Pro or Pro mini on the board menu of the IDE. Then I choose Atmega328 (3.3V, 8Mhz). Notice that I chose 3.3V even if the board is 5V. It is ok, as I don’t use the ADC in this project and there is not an 5V, 8Mhz option. This way I don’t have to edit board files outside the IDE or whatever, I find these kinds of workarounds a pain in the neck. To upload the code I use a USBASP with the option Upload Using Programmer (Ctrl + Shift + U).

I did not get the timing right last time. But now I have studied a little, this led me to implement an interrupt driven loop.

The game loop is updated mostly every 60Hz, while the screen is not. Although the display is SPI driven, it is bit-banged with the GPIOs. Also, the MCU runs at 8Mhz, while it could be ran at 20MHz without problems. Thus, updating the screen, which happens only when something has to change on the screen, takes a lot of time compared to computing the game state. The gameTick() function verifies the inputs and calculates the next frame, you can see it below:

As the encoder is used for input, spinning it moves the piece sideways, while clicking it rotates the tetromino. An optional push button can be connected between pins 1 and 3 of the testing socket to act as a drop button, the button which accelerates the fall of the blocks.

Unfortunately, I have to disable the encoder when not using it. The encoder shares the LCD display pins and is only active inside the waitInterrupt() function. This function, alongside the interrupt service routine of the timer 1 can be seen below:

So, after the game is done calculating everything for the current frame, it waits for the next frame while polling the encoder. It is obvious that when the LCD is being used, some turns of the encoder will be missed, but there is no way of getting around this issue.

Back to the problem of the screen taking too much time to communicate. In order to decrease the update times as much as possible, only the parts of the screen which need to be updated are rewritten to the LCD. For example, let’s see the function that moves a tetromino:

A tetromino is composed of four blocks, and these blocks can only be placed at 200 possible positions (the tetris “field” is 10×20 blocks). This 200 positions are kept in the variable “Buffer”, which contains the color of each block. Thus, the old position of a block of the moving tetronimo, which is to be erased, and the new position, which is to be colored, are added to an queue. Every frame the drawing function checks this queue for data and only if there are blocks present, these are drawn on the screen:

The rest of the screen elements are updated asyncronoulsy. Anyways, when these are updated, the game flow is usually blocked, so it is ok. For example, when a line is cleared, the score is updated, all the blocks above that line have to come down and the player has to wait for the next new tetromino to appear.

I could not finish the game without the iconic korobeiniki, so had to implement sound. For this purpose, I use the PWM output terminal. This was very simple, as I already wrote dozens of song sketches for arduino as a sheet music reading exercise. The tone function from Arduino can generate a square wave in the background, using the timer 2. Then I simply check every frame if its is time to change the note being played or rest between notes.

I won’t discuss the whole code, otherwise this post would become even longer. You can see the complete code on Github. Don’t expect it to be good, but is is well commented! Below I leave a short video of he game running:

There are still a few bugs that rarely appear and are annoying to debug. I won’t lose sleep over this though, as this game was just a proof of concept and not the main objective of the project.

That is it for now. Thanks for reading until here.

See you next time o/