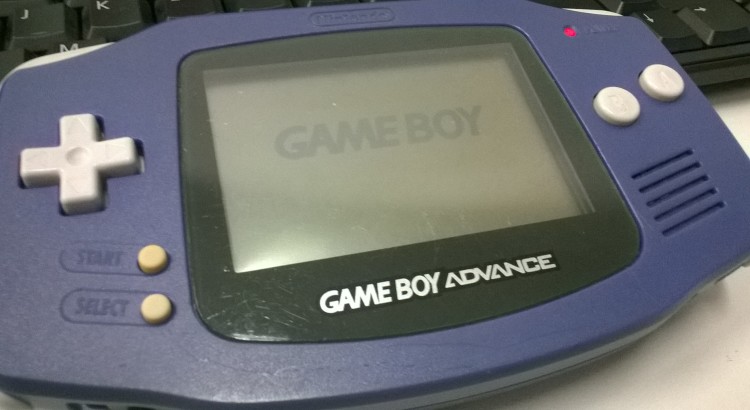 I told about a Game Boy Advance I bought on post last week, and how I got its schematics and service Manual. I also talked that its screen had a problem. Well, now it is a little better, not perfect but it definitely works.

I got this really cheap GBA, they can be a lot of money here where I live, even if it is broken. I never touched a GBA before, working or not, so I bought it when the guy offered. He said that it was with low sound and the screen was damaged. The photo that the seller sent me.

Well, When someone says that a screen is damaged, I can think that somebody step on it, it fall on the floor, someone got angry and smashed it with a hammer or anything like that. The truth is that when the GBA arrived I could see that the screen was not damaged, showing the images correctly, but the plastic that cover the LCD module was full of bubbles, not allowing to see the images well. I should let it to another time when I were relaxed, but I’m a “little” anxious and I didn’t wait.

First, pardon me for not being smart enough to take photos of the bubbles on the LCD and the process of retiring the old plastic.

As said before, I never touched a GBA, I only have a Gameboy Color(and there is not even a month I have it), but I didn’t try to understand bits LCD works (I can say it’s because of lack of time). When I saw the bubbles on the LCD, I thought: “Ah, this should be the problem, I will just take this plastic and the LCD will be fine to see again”.

Done, I retired the plastic and the screen was smooth again, I had all the care to not broke the cable and hold the LCD by the borders to not do pressure and break the center. “Nice, you got the GBA five minutes ago and already broke it? You should stop opening the things”. Yeah, not working, the screen was “white”, by “white” I mean it was showing nothing, because the GBA hasn’t even a backlight to show real white. That was a shame, I broke the video game minutes later after receiving it, I couldn’t believe, so I did some more tests.

Then I remembered that video/instructable/whatever where the guy disassembles the LCD Monitor and do glasses with the polarizer filter, right polarizer is the word, so only he sees what is on the computer. That was followed by a double facepalm and then a facedesk.

I took the old plastic and put it on the screen, I could barely see the game boy logo. -Bingo!

So, anyway the old plastic was definitely not going to be used again, maybe a bread roller could fix it. I don’t think so.

The guy on the video took the polarizer filter from the LCD monitor, we disassembled some of these days ago at the university, maybe I could still try to get the polarizer from one of them. They still were in there, I had not sure it that should work, let’s see the results below. Ah, I began thinking and take some photos from now. The victim, we got the acrylic sheet from these monitors, so it was already disassembled.

These monitors can take blood out of you, I almost cut my fingers. The polarizer is glued on a thin layer of glass, so that glass it will probably will broke while taking the plastic away. You can see the photo of the plastic on the monitor below: Look’s like it works! now i can read the letters well, just had to cut it on the right size and put it above the LCD.To open the GBA, you will need a tri wing screwdriver, they have an “Y” format tip, there is an complete teardown of the GBA on iFixIt. What kind of sorcery is this? Science. Still had to clear the filter’s back.

There was glue on the plastic, not allowing to see well, I used Alcohol to clean all the glue. The plastic without glue and the one with it is below to compare: A little of alcohol was used to clean the plastic on the right.

And it proudly working: Ah, I was not satisfied with the results, the screen was really dark at night, then I had a “Eureka!” moment and realized the polarizer MUST be in a right position, so it’s good to rotate it above the screen to see the angle where the image is the better, and then use a pencil to mark lines where you will cut after. The image above is the last result. The one before with professor OAK is of when the polarizer was in a bad rotation.

That’s it. I still don’t have any GBA game, so only tested it with GB games. I’m glad with the results now, I don’t think it is perfect, but is a lot better than before. I think that I bought the GBA to learn about it and how it works, haha, so totally worth it! I also leaned that I should do some research before taking away plastic of the things…

Thanks for reading and if you will try this, you’re risking your LCD screen, be careful and good luck! Hey, don’t forget the sound still doesn’t work, so soon I will try to fix that too and talk about here. See you!

12 thoughts to “Fixing a Game Boy Advance with bubbles on the screen- zero cost.”